For other uses, see TwinBee (disambiguation).

TwinBee (ツインビー, TsuinBī?) is a cartoon-themed vertical-scrolling shoot 'em up game originally released by Konami as a coin-operated video game in 1985 in Japan. It was the very first game to run on Konami's Bubble System hardware. TwinBee was ported to the Family Computer and MSX in 1986 and has been included in numerous compilations released in later years. The original arcade game was released outside Japan for the first time in the Nintendo DS compilation Konami Classics Series: Arcade Hits. A mobile phone version was released for i-mode Japan phones in 2003 with edited graphics.

Various TwinBee sequels were released for the arcade and home console markets following the original game, some which spawned audio drama and anime adaptations in Japan.

In space calendar 2801, an army led by the evil King Spice unexpectedly came from outer space and invaded the peaceful Donburi Island.

After Spice the Great had completed the island's occupation, he divided the land into five regions, which were then given to his four generals to be governed by them, while he reigned over the last one.

Meanwhile, a quirky scientist living on the edge of the island named Dr. Cinnamon was secretly developing two airship fighters: TwinBee and WinBee. His two sons, Annamon and Donnamon, stepped in to test the prototype fighters and with them they bravely fought and defeated the invading army, its generals, and ultimately defeated King Spice.

TwinBee can be played by up to two players simultaneously. The player takes control of a cartoon-like anthropomorphic spacecraft, with Player 1 taking control of TwinBee, the titular ship, while Player 2 controls WinBee. The game controls consists of an eight-way joystick and two buttons: one for shooting enemies in the air and the other for dropping bombs to ground enemies (similarly to Xevious).

The player's primary power-ups are bells that can be uncovered by shooting at the floating clouds, where they're hidden. If the player continues shooting the bell after it appears, it will change into one of four other colors:

The green and red bells cannot be combined together. Other power-ups can also be retrieved from ground enemies such as an alternate bell that gives the player's ship a three-way gun or a star which eliminates all on-screen enemies.

If two players are playing at the same time, they can align their ships vertically or horizontally together to perform more powerful attacks.

TwinBee originally appeared as an arcade game. It was later ported to MSX and the Family Computer. The Famicom version was re-released only in Japan under the Famicom Mini label for the Game Boy Advance, and the Nintendo Switch Online on November 14, 2018 worldwide, with an SP version titled TwinBee: A second helping of Donburi Island! released on June 12, 2019.

This game was officially released for the first time outside Japan as part of the Konami Classics Series: Arcade Hits for the Nintendo DS in March 2007, under the name RainbowBell in North America, although the TwinBee name was restored for the European release. TwinBee was released in Japan on August 10, 2011 and in other regions on September 22, 2011 for the Nintendo 3DS as a part of the 3D Classics series. This release was featured among other games from the Nintendo Entertainment System and Super NES to be released for the 3DS on a tech demo called Classic Games at E3 2010.[1][2] TwinBee is also available on the Game Room service for the Xbox 360.

TwinBee received a total of 68/100 on Metacritic which is mixed to positive with an average rating of 6.8. 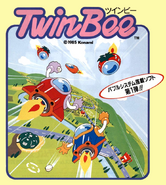 Retrieved from "https://twinbee.fandom.com/wiki/TwinBee_(video_game)?oldid=14942"
Community content is available under CC-BY-SA unless otherwise noted.