For other uses, see TwinBee (disambiguation).

TwinBee (ツインビー, TsuinBī?) is the titular character and main protagonist of the TwinBee series. He is an anthropomorphic and sentient blue aircraft with a single canopy. He was created by a scientist called Dr. Cinnamon, and it is this brilliant man's grandson, Light, its current pilot. TwinBee is WinBee's twin brother and GwinBee's older brother.

TwinBee is present in every game of the series and has also made recurring appearances in many other Konami games, whether it is as a cameo or a fully playable character, including the Parodius and Wai Wai series, to name a few. TwinBee also appeared in pop'n music 17: THE MOVIE as a cameo character and Bombergirl as model figure.

In his first localized game in North America, he was renamed Stinger, but has since recovered his original name in the following installments.

He is voiced by Mayumi Tanaka.

TwinBee is a piloted aircraft fighter that originally appeared in the 1985 video game TwinBee as the main ship controlled by the player. Since then, he has maintained this role in all sequels. TwinBee is always accompanied by a similar pink ship called WinBee, which is controlled by the second player and which has the ability to join with TwinBee to perform combined attacks. In recent games, a third green ship called GwinBee also joins them.

The game's story begins in 2801. TwinBee and WinBee are two airships built by Dr. Cinnamon, an genius inventor who created them to defend Donburi Island from invading villains. He also assigned his two own sons, Annamon and Donnamon, as pilots.

In the first games, the appearance of the "Bee" ships resembled that of a rocket with a rounded front and two large arms with glove-type fists which allow them to execute various attacks.

In the video game Detana!! TwinBee from 1991, a renewal in the aesthetics and history of the series took place and which remains until today. The "Bee" ships are no longer simple vehicles, but are also intelligent autonomous robots. Here, the appearance of TwinBee changed a lot, and his original design, which looked like a rocket, now resembles a sphere with cuffs and turbines on the back. In addition, he acquired large feet to walk and fight on land and a small mouth that allows him to speak. Since this new game, he was assigned his definitive pilot, called Light, who is none other than Dr. Cinnamon's grandson. Another new skill given to TwinBee is the ability to reduce to ⅛ of its original size, so that when he's not fighting he can stay close to his pilot like a pet.

In the various anime based on the TwinBee series, it can be seen that this character is a robot capable of speaking fluently and with a friendly, energetic and childish personality. He can talk to his pilot as if they were friends and he can switch from air mode to land mode very easily.

In addition to the TwinBee series, this character has appeared in both Wai Wai World games as a controllable aircraft in the shoot 'em up style levels and has also made appearances and cameos in many other installments of the Wai Wai series. He has also played an important role in the Parodius series, where he's often one of the selectable characters and where he appears as an independent, sentient ship without a pilot.

TwinBee is a blue jet mecha with arms and legs, and wears white gloves and blue sneakers. He has yellow turbines and windscreen.

TwinBee is a fast combat aircraft that is distinguished by having two arms with large fists that allow it to execute different attacks. In classic games, TwinBee is destroyed with a direct impact, although in later games a life bar was added that allows him to withstand several attacks and even recover health.

These are TwinBee's common attacks; their availability changes according to the game.

TwinBee can get improvements in his arsenal when bell items appear and the player shoots them until they change color. Each bell color gives a different power that varies according to the game. These powers are:

In its robot form, TwinBee is a small spherical android that can walk and fight on the ground without the need of a pilot.

In the Parodius series, TwinBee uses a different power-up system, similar to those in the Gradius series. 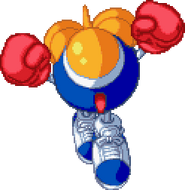 The TwinBee ship frequently appears as one of the selectable characters throughout the games that conform the Parodius series. In these games, he is smaller in size and has no pilot, acting all on his own.

Appearances in other media

Following the publication of Pop'n TwinBee for the Super Famicom, a serial radio drama version with the title TwinBee PARADISE was produced, which began its broadcast on the radio station NCB on October 10, 1993. The series lasted three seasons, with the third and final season ending on March 30, 1997, and comprising a total of 96 episodes, which would then be published in CD drama collections.

TwinBee PARADISE incorporated the same cast previously introduced in both Detana!! TwinBee and Pop'n TwinBee. It also further developed and expanded TwinBee's fictional universe and many of the elements of the story presented in the radio dramas were canonized in later video games, such as TwinBee Yahho! and TwinBee RPG. Such was the case of TwinBee and WinBee's pilots, Light and Pastel, who in the games were originally unnamed.

Retrieved from "https://twinbee.fandom.com/wiki/TwinBee_(character)?oldid=16737"
Community content is available under CC-BY-SA unless otherwise noted.