Ace (エース -, Ēsu?) is a character in the TwinBee series. Originally introduced as a minor antagonist, he has since become a support character and ally to both the TwinBee and Parodius Teams.

Add a photo to this gallery
Sexy Parodius 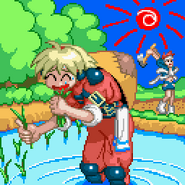 Retrieved from "https://twinbee.fandom.com/wiki/Ace?oldid=14635"
Community content is available under CC-BY-SA unless otherwise noted.